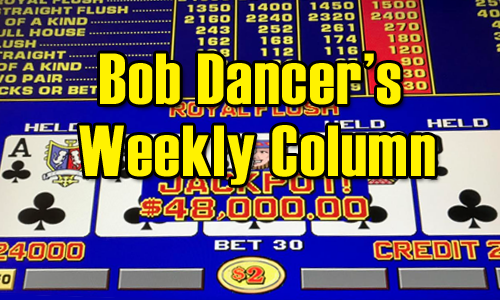 Using a W for wild card to indicate a deuce, assume you are dealt W W Q♦ J♦ T♦ on a Triple Play version of Deuces Wild. This is not a tough play. You hold all five cards for a wild royal flush. (Other terms for the same hand are royal flush with deuce and dirty royal.) Usually this pays 100 or 125 coins, depending on the pay schedule, and in the specific version you’re playing it returns 100 coins.

But wait! Technically this could be a straight flush, couldn’t it? After all, the two deuces could represent the 8♦ 9♦, couldn’t they? There are several versions of deuces wild, but assume in the version you’re playing, 5-coin straight flushes return 50 coins.

One of the general principles of video poker is that each hand is valued at its highest payout, so since 100 coins is greater than 50 coins, clearly this is a wild royal flush and not a straight flush.

This is too tight for intelligent, disciplined gamblers to sit down and play long sessions, but sometimes it’s a good play. Several hands, namely the flush, full house, four of a kind, straight flush, five of a kind, wild royal flush, and four deuces, come with multipliers that keep building until they are hit, or reach the maximum value allowed for that pay schedule category. Most start at 1x, but the wild royal flush in this game starts at 2x. The top end of the multipliers varies from 4x to 10x. These multipliers do not go up evenly. Straight flushes, for example, go from 1x to 3x to 5x to 7x to 9x to 10x.

Other Ultimate X Gold games have similar multipliers that grow when triggered by certain dealt hands. Each pay schedule of each game has its own strategy.

Surely when enough of the multipliers are high enough, this is a game with positive EV. Sometimes very positive EV. There is considerable speculation on the Internet as to when a particular pay schedule is positive. While I do play this game sometimes when I see a combination of multipliers that I believe is too good to pass up, I’m not an expert at this. And that’s not what today’s article is about.

Does the rule that W W Q♦ J♦ T♦ is always a wild royal flush and never a straight flush still apply? Doesn’t being forced to accept ‘only’ 200 coins per line seem unfair when an argument could be made that it should be 500 coins per line?

It turns out I received this same basic question twice in a matter of days, only the second was comparing a straight flush (with a 1x multiplier) with a flush (with a 10x multiplier). Both players wanted to know to whom they should complain in order to be paid the higher amount.

Both players who contacted me were quite upset at being forced to accept the lesser payout. Too bad. Each combination of five cards has one and only one payout. But, as Patty Loveless sang in a country western song from the mid-1990s, you can feel bad if it will make you feel better.