Unibet is on the spot

Getting familiar with one of the most reliable poker rooms out there!

Unibet was founded in 1997 by Anders Störm of Sweden. Nowadays it has more than 10 million customers all over the world and became one of the biggest gambling site in Europe. It offers a wide variety of opportunities in online gambling, betting and poker. Since 1998, it has a licence issued by a Maltain authority. Eventually Unibet built up a strong reliability among its customers with the quality opportunities.

Unibet is able to individually compete with competitors such as 888, partypoker and WPN.

games If you wanna play poker at Unibet you can certainly choose from a lot. Either you can play cash games, MTTs or SNGs. There is also a unique format, HexaPro to play with. In case you would like to try, you can play online tournaments as well.

You can find almost any time a table up to NL400. During rush hours it is especially easy to find a table that matches with your preferences. Since the sport-betting limb of Unibet is pretty good, it lures many recreational players to play poker which means that you can play against relatively weak opponents at this poker room.

In case you are comfortable playing poker tournaments, you are at the right spot. Unibet offers you plenty of tournaments you can choose from. For instance, probably the most common tournament played out in freezout format in which is you plays until you win (or lose all your chips). There are plenty of freeroll tournaments as well which have no fees to be paid in order to enter. Unibet provides freeroll tournaments hourly. Moreover, there are also guaranteed tournaments (GTD) to play, meaning that the prize pool is being guaranteed even if the amount of the buy-ins does not reach the guaranteed prize pool by itself, the organizer (Unibet) will cover the missing amount.

Under the name HexaPro, Unibet offers you the Spin-type games:

If you are an SNG-type player you should definitely check the SNG tables provided by Unibet. The platform itself is really handy and easy to use. There are two types of SNG tournaments the 2-handed and the 5-handed. The tables fill up pretty fast so you can play lot of hands whilst the opponents you play against are deemed to be not so strong. There is also a pretty good bonus in the amount of € 200.

The per centage of rakeback may rise up to 49.5% if you have EUR 43,655 rake during a quarter. It is important that you can have rake by playing real money poker through cash tables, tournaments or HexaPro.

By collecting points, you will increase your level which will lead you to higher rakeback.

Here you can find a summarizing table of the new loyalty system: 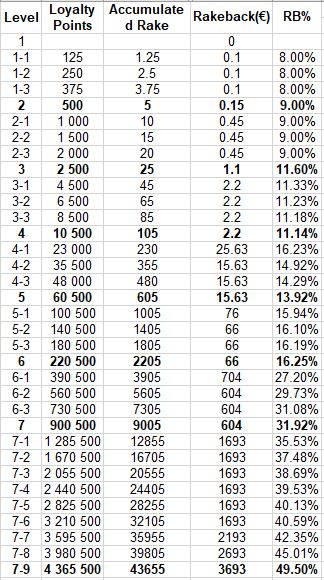 Since playing poker is evolving rapidly among players it is crucial for poker sites to offer rakeback and try to have as many players (meaning as much money) as possible. Unibet is no exception.

Other than that if you had registered to Unibet via rakerace.com, you will participate in an exclusive race held monthly by which an €3,000 prize pool is offered where the average rakeback was around 10-15% based on the previous data.