Pragmatic Play has recently added its second release inspired by a Mexican-originated holiday. The first slot with this theme by the name Day of Dead was released in 2021 and a year after it got a rival in the form of Muertos Multipliers Megaways.

Can Day of Dead defend its reputation or the new release will send it to the underworld in a coffin? Find out in this episode of slot wars!

Muertos Multiplier Megaways slot comes with a roaring winning potential of up to 10,000x the bet. That is followed by extremely high volatility and a big grid with 6 reels, 2 to 7 rows and up to 117,649 ways to win.

While its rival slot has the same level of volatility, its maximum prize is much lower – 4,500x the stake. The grid is also smaller, featuring 5 reels with 4 rows and 20 paylines.

With so much bigger winning potential, there’s no doubt who is the winner of this round as Muertos Multiplier Megaways blew away its adversary. But nothing is settled yet as there are two more rounds that might turn things around.

Day of Dead slot has strong bonus features to enhance the gameplay, starting with the special tombstone Walking Wilds. Whenever a Wild hits, it expands covering all positions on its reel, pays wins (if there are any) and triggers a respin. During a respin, expanded Wild moves one reel to the left until they fall off reels.

Landing 3 Scatters on reels 1, 3 and 5 activates the Free Respin round where almost everything is the same as in the previous feature. The biggest difference is that when a new tombstone-looking Wild appears in a respin, it is collected at the top of the game grid. 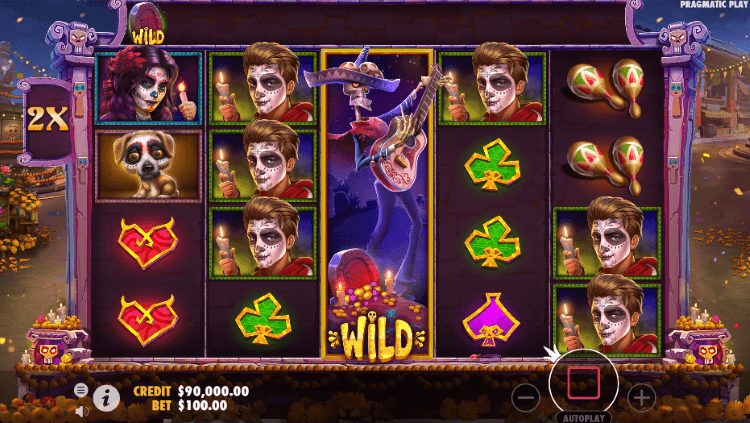 As a slot with megaways mechanics, Muertos Multiplier has a tumble feature that removes symbols from winning combination and allow others to drop into empty places. But the star of this game is Wild Multipliers since every Wild that hits the reels comes with a 2x or 3x multiplier attached to it.

Multipliers are collected and stored to the side of the reels on a meter and applied to the tumble. The value of multipliers in the meter increases as the new Wilds hit, but the meter does reset in the base game between every spin to 1x.

The bonus round is triggered by at least 3 Scatters landing simultaneously, but the number of awarded free spins is determined by the spin in the wheel of fortune. After the spin stops and you get the number of spins, there’s an option to use them as a stake for the gamble feature.

On every tumble during free spins, the win multiplier increases by +1 while Wild Multipliers act the same as in the base game. However, here the multiplier meter doesn’t resets until the feature ends.

The Buy Bonus option is available in both slots. In this round, Muertos Multipliers Megawaways takes the lead once again as its bonus features are potentially more rewarding.

Dia De Los Muertos is a two-day holiday originated in Mexico that reunites the living and dead. Families are creating offerings to honor their departed loved ones, get together and enjoy the festivities and food.

It is unlike any other holiday because it celebrates the dead and the living at the same time with cheerful music, dance, costumes, treats and laughter. Pragmatic Play has caught the atmosphere perfectly in both of these slots inspired by this holiday.

Visually speaking, the two games have the same superb level of graphics, animation and gorgeous symbol design. There can’t be a winner in this round as both slots are equally appealing to the eye.

And The Winner Is… 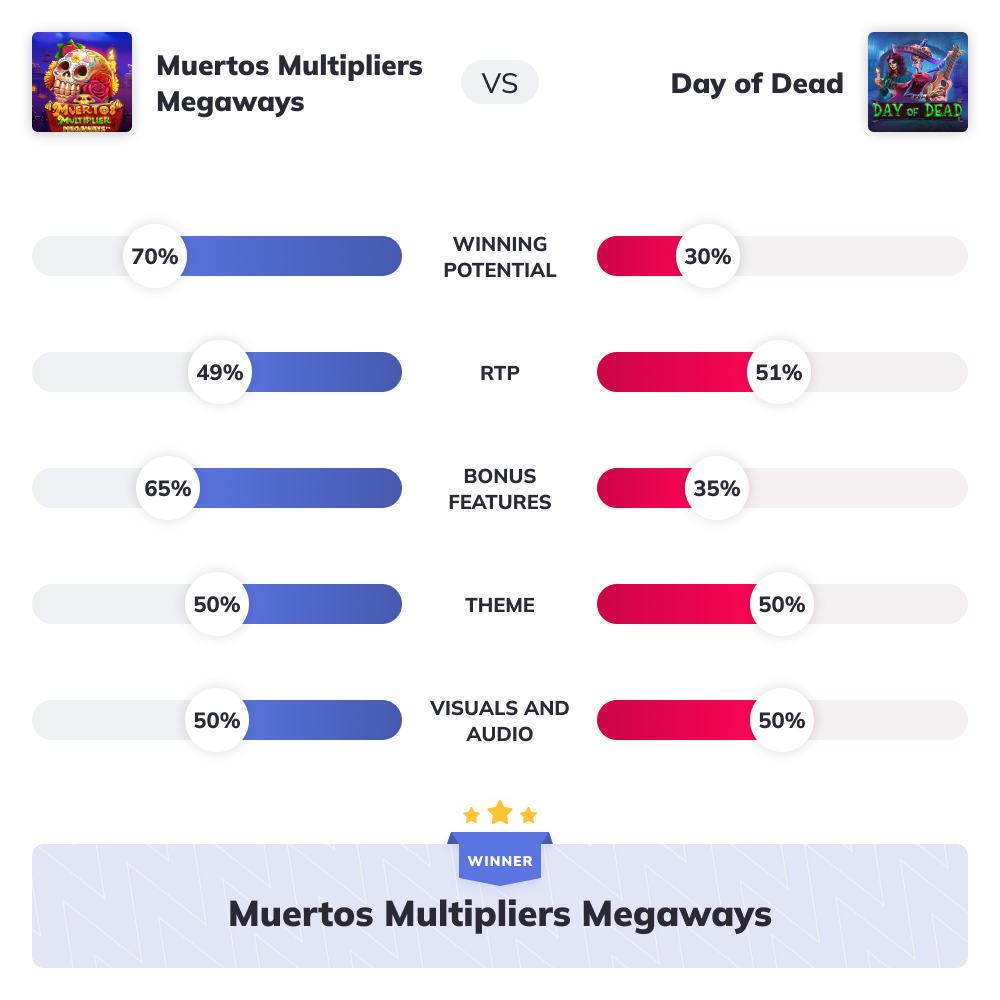 Although both titles feature the same theme, their mechanics are quite different. As well as winning potential and bonus features that made Muertos Multipliers Megaways the winner of this slot war.

Still, Day of Dead certainly has its charms with its Walking Wilds dancing on reels in the rhythm of the upbeat background soundtrack. These games are an amazicontributionsion to the Halloween slots genre, so make sure to check them out.