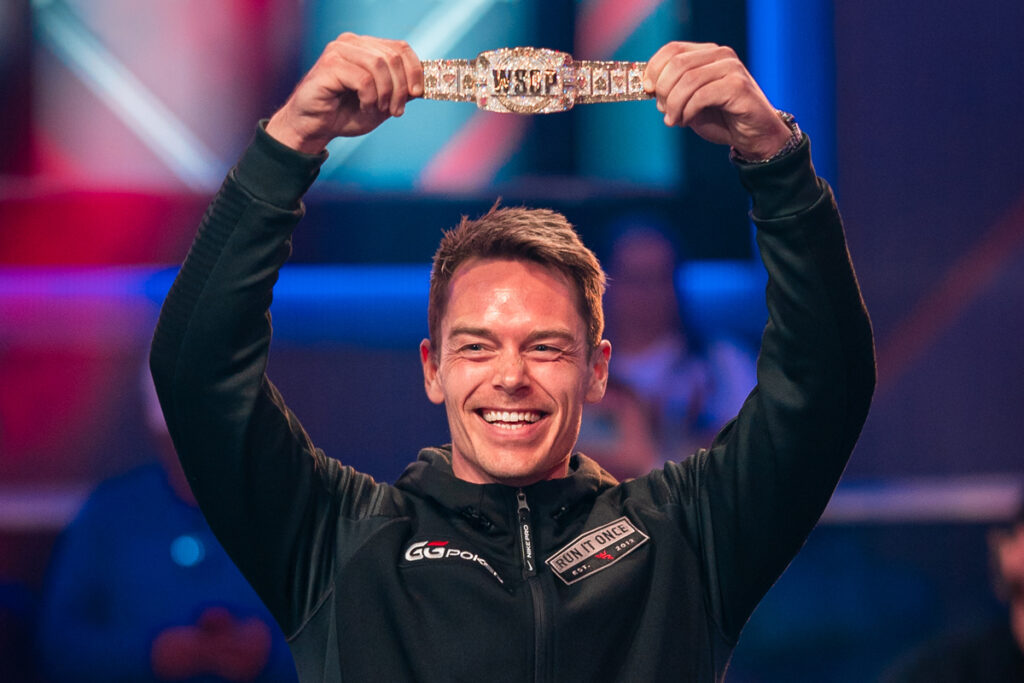 Jorstad snagged a $10 million prize and some sweet bling.

This year’s World Series of Poker was held at Bally’s and Paris, making Jorstad the first-ever Main Event champion to take the prize on the Las Vegas Strip. The event was previously held at Rio.

The world learned the WSOP was moving to The Strip in a Tweet nearly two years before the move was officially announced. Our crystal ball would come in handy playing poker, come to think of it.

More on the future home of WSOP: Look ye not unto Caesars Forum, but rather Bally’s. Romans said “ye,” right?

This year’s WSOP was remarkable for another reason as well. Bally’s is rebranding as Horseshoe. Binion’s Horseshoe was the original home of the WSOP.

The runners up in this year’s WSOP did fairly well, too.

As for the winner, Espen Jorstad, the WSOP says the first thing he did after winning was to call his mother, who he described as his “biggest fan.”

The Main Event bracelet is custom-created by Jostens, a jewelry designer and producer, from 18 ounces of 10 karat white and yellow gold, with 2,767 precious stones.

The value of the Main Event bracelet is estimated to be a metric buttload.

There’s a sweet compartment in the bracelet, too. The compartment holds a gold chip that can be used as a card protector.

There were 8,663 entrants in this year’s $10,000 buy-in Main Event, the second largest field in the history of the WSOP.

The World Series of Poker remains the premiere poker tournament in the world. We know this because: 1) “World” is right in the name of it, 2) the WSOP is where Matt Damon went at the end of “Rounders.”

See you next year. Until then, we’ll be polishing our crystal ball. Which definitely isn’t a euphemism for anything.