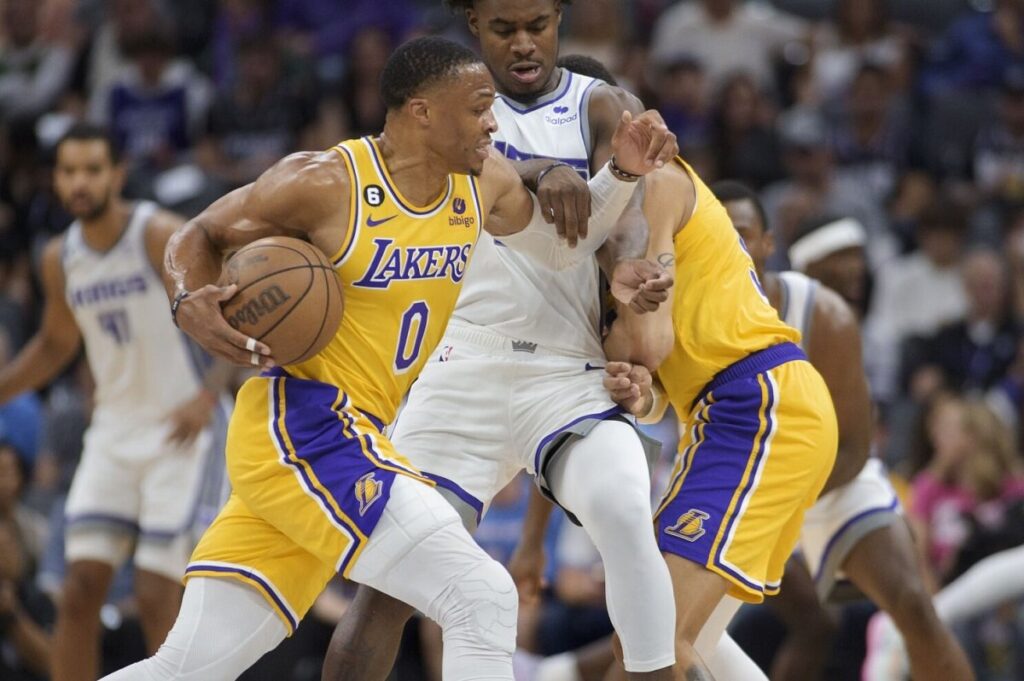 The Los Angeles Lakers wanted to try something different with point guard Russell Westbrook coming off the bench in their final preseason game, but the experiment did not go as planned when his stint prematurely ended due to a hamstring injury.

Westbrook left the court in the first quarter against the Sacramento Kings, which the Lakers later explained was a left hamstring injury.

Rookie head coach Darvin Ham hinted the Lakers would utilize Westbrook as their sixth man after they signed point guard Dennis Schroder. The concept of Westbrook as a reserve never came to fruition until the Lakers gave it a whirl last night.

In 78 games with the Lakers last season, Westbrook averaged 18.5 points, 7.4 rebounds, and 7.1 assists per game. He dipped under 20 points per game for the first time in 11 seasons.

The Lakers missed the postseason last year, and bubbled the Western Conference Play-In Tournament with a 33-49 record.

Ham insisted that moving Westbrook to the bench as the sixth man was not a demotion.

It’s not a demotion, it’s a realignment,” Ham told the L.A. Times.

Westbrook is a former MVP who averaged a triple-double for three seasons in a row during his tenure with the Oklahoma City Thunder. It could be a huge blow to his ego if he gets a full time reassignment to the second unit. Ham and the Lakers think Westbrook coming off the bench would put them in the best place to succeed on a nightly basis and compete for a NBA championship in a stacked Western Conference.

“We discussed it yesterday, and it’s something we’ve touched on during the summer here and there,” added Ham. “He’s been a pro, man. Russ is one of the most beautiful human beings I’ve ever come across in this business, on and off the floor. He totally understood. Totally looked me in the eye and said, ‘Yeah coach, whatever you need me to do.’ You can’t take that for granted.”

Boisterous fans, amateur medical experts, and NBA conspiracy theorists were quick to voice their opinion on Westbrook and his subsequent hamstring injury. Although there was no video evidence of when the injury actually occurred during the first quarter against the Kings, it coincidentally happened on the same night the Lakers wanted to try out Westbrook as the sixth man.

When Will the Lakers Trade Westbrook?

Rob Pelinka, the general manager of the Lakers, would’ve traded Westbrook by now if he found an offer than benefited the team and did not cost them precious draft capital. The Lakers leveraged the next few years of draft picks in previous trades that brought Anthony Davis and Westbrook to the team.

Pelinka hopes other teams will lower their asking price after the season begins and it gets closer to the trade deadline next February. In the meantime, Ham and the Lakers have no choice but to play Westbrook and try to figure out a way how he can fit in with the team.

Ham replaced head coach Frank Vogel who got fired in the offseason. Vogel and Westbrook clashed from their first practice in training camp last year. Their fractured relationship was a harbinger of doom for the rest of the season.

Ham said his goal was to find a way to make the Lakers’ offense flow with Westbrook, James, and Davis on the court at the same time. After feeling out the team during the preseason, Ham wanted to try out Westbrook off the bench. Vogel had a similar notion last season, but he got a lot of blowback from Westbrook and the front office.