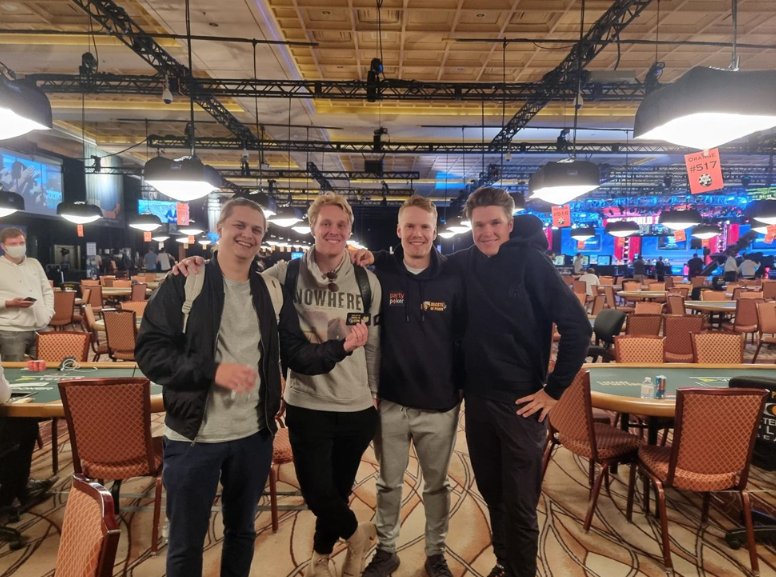 I cannot sleep. It has been a week since I arrived in Vegas and my inner clock is bust. Everything else is bust too, I am like the reversed King Midas – everything I touch turns to dust. My one bullet to the 10k PLO went faster than the migraine attack I had before the tournament, 25k PLO was the same thing, only with two bullets.

For a week I have been sleepwalking through the casino halls, and nothing feels quite like it should. I feel numb, and the more I lose the number I feel. And I lose all the time. After busting my first $65k depo I transferred another one, collected it and was left with $70 000 in cash that I threw on the top of my bed. All mine, all hard earned from the online grinds and gotten here with a 2% vig on a BTC transfer. Just looking at that pile of cash should have made me feel something. Excited perhaps? I could not really remember, but I did remember that a trick like this had worked before. This time, it did not. It was just a pile of paper. And it smelled the kind of smell when paper gets wet and dries again, a little bit rotten perhaps.

I marched to one of Wynn’s boutiques and bought a pair of sneakers worth $1100. Nothing feels like anything anyway so why not? After the purchase I came back to my hotel room, put the shoes on and ogled myself through the mirror. The shoes reminded me of an old ad campaign run by a finish affiliate Pokerisivut.com which was just a sticker that said, “this too was bought with poker winnings.” I used to love that campaign. Way back then, when I received my laptop/screen or whatever with my VIP-points the most important part was to show off the sticker to my family. There was even a giant version of the sticker (which was more like a flag) hung from Jeans’s apartment balcony for the whole of Helsinki to see. These shoes brought me back to that time when I saw that flag for the first time. Time when I dreamed of being a poker professional and hoped to get an invite to one of the parties that that place must have hosted many times.

“Huh, this too was bought with poker winnings” I muttered proudly. And then it happened; the absurdity of the moment was so strong that it restored my consciousness, and I could see myself truly again; a somewhat fat pale man with ridiculously expensive shoes, muttering to himself in front of a mirror next to a giant pile of cash.

What the fuck is this?

And the inner monologue, that was momentarily lost, started at once: You could have saved someone’s life with that money, you know.

Days in Vegas followed a pattern: I would wake up next to a half-eaten Cobb-salad. This salad had two key factors that I had to evaluate every morning before making any decision about it: 1. It had been at room temperature for the last 8-hours, and contained chicken, blue cheese, and mayonnaise. It was certainly a health hazard even if my hotel room was set to a chilly 65°F. But: 2. Cobb-salad from the Wynn’s room-service cost $40,84.

… Often, I would end up eating the Salad.

After battling with the salad, I would try to do an exercise of some sorts (either gym or golf), then do a quick visit to my room for some mindfulness, which, the longer the trip went, turned more into a prayer for a winning session than anything even remotely meditative. When all of that was done, I usually got into the tables and got my ass handed over to me. Then back to the room, order a 40$ cobb salad & repeat. It was weird and numbing but at least since I bought the shoes, I started to feel a bit like myself again – mostly just like a dick though.

There was still one more tournament to go; $5k half and half. A tournament that I very much looked forward to, partly because of the more comfortable $5k buy-in but partly also because I thought that it would draw a far softer field than anything I had played before.

I finished day one of the HA with a strong stack. All my tournament predictions had come true: I was playing more relaxed, and the field was insane (not getting coolered helped a ton too). Before we started day two, I shared a breakfast with Eelis, Joni and Niklas who also had made it to day two.

“Wouldn’t it be funny if all of us made it to the final table?” someone said.

“Haha, yeah that would be insane”

There were still more than one hundred players remaining so all of us knew that it would be next to impossible for all of us to end up there.

But… as I am sure some of you already predicted…

Niklas, I, Joni, and Eelis before the final table. I am wearing the shoes that brought my consciousness back (would not recommend).

Sadly, I was the first to bust out. My last hand was in NL, which is my weaker game. CL from an early position opened with a min-raise. I was on BB (with a BB ante) and around 14 big blinds looking at KhJc. Others fold, I defend. Flop comes Ks Tc 3h

I check, he bets one-third, I call.

I did not feel good about the hand – holding the Jack of clubs is not great but… I did not have the heart to make the fold either. I have read too many 2+2 high stakes NL threads to know for a fact that a pair never folds in this weird two card game, and I had top pair – basically the nuts. So, I called, the villain showed KQ, the river was a blank and GG’s.

I cashed for $42 000, ordered four beers (two for me, two for others) and headed straight to the rail. Seeing your good friends dominate and play for a bracelet while drinking beer and partying right next to the action is an experience, I would not change for anything.

When it was all said and done, Eelis had taken down his first bracelet and more than $500k in prize money. The untold secret of the poker world (at least with us Finns) is that IF you ever manage to win a bracelet – you will cover the bill for the rest of the night. Sadly, Eelis was – despite his very recent 500k+ cash – a cash broke. Luckily, I had 10k in cash, which I quickly gave to him combined with a WhatsApp message adding 10k to his debts. Immediately after handing the cash out to him, I took $400 out of the pile for “Quick Muling & other purposes – just you know, if you’re not close by…”

He had no options but to laugh. The audacity was too much. Also, he was a bracelet winner. Why would he care?

We went to the Wynn’s lobby bar, and I used the $400 for the first round. Life was good.

And then we partied the night away.