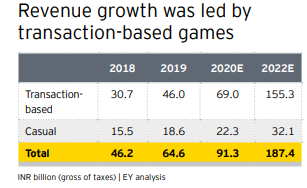 A 2020 report on India’s Media & Entertainment Sector titled ‘The era of consumer A.R.T. – Acquisition Retention and Transaction,’  released by the Federation of Indian Chambers of Commerce & Industry (FICCI) and consulting firm Ernst & Young (EY) claims that online gaming grew at a rapid 40% growth rate in the year 2020 and the total revenues generated by the sector in the year 2019 was Rs. 6,500 crores (Rs. 65 billion).

The report further claims that out of the Rs. 6,500 crores garnered by the online gaming industry in 2019, transaction-based (including real-money) gaming contributed about Rs. 4,600 crores, while the remaining was contributed by casual games. The total number of gamers in the country are pegged by the report to be around 36.5 crores (365 million).

EY also estimated that amongst various categories of real-money gaming, fantasy sports grew by over 100% in 2019, while poker and rummy grew by around 30%.

The report further forecasts that online gaming would continue to see robust compounded annual growth rate of about 43% over the next 3 years to become a US$2.5 billion dollar industry (about Rs. 18,700 crores) and would account for over 40,000 direct jobs in the country.

It is also reported that the total indirect tax contribution of the online gaming industry in 2019 was estimated to be around 9,800 crores, with the 2022 estimates pegged at around Rs. 28,600 crores.

The FICCI-EY report, which was supposed to be unveiled at the flagship FICCI Frames event this month, was released digitally due to the cancellation of the event in light of the Coronavirus crisis.

The report adds a caveat that its estimates and forecasts have not accounted for the economic impact and disruption caused due to the Coronavirus pandemic.