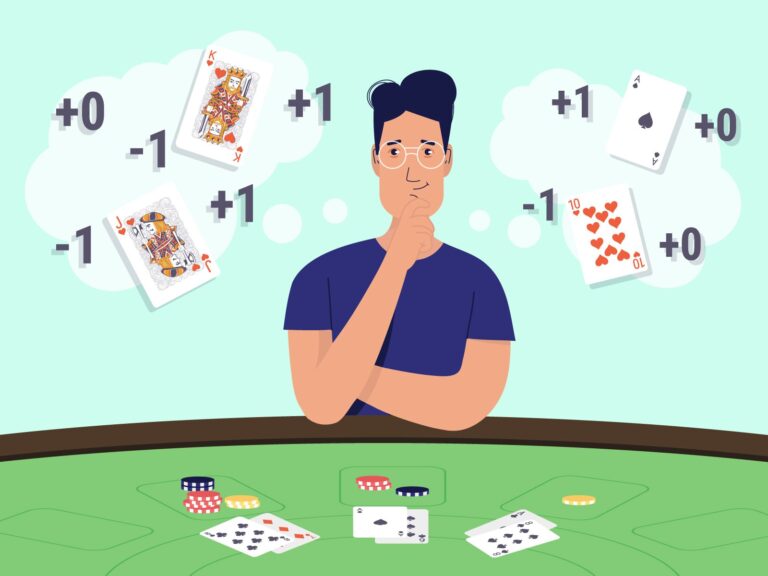 When it comes to getting an edge over the casino, many players look to card counting.

This age-old practice involves keeping a mental tally of the cards dealt, so you know information about the cards that haven’t been dealt.

Many people believe that card counting is illegal, but that’s not actually the case.

It’s certainly frowned upon by casinos, however, who will quickly remove any player they think is dabbling in this practice.

Card counting is seen by many players as a great way to get one over on the house, but we’ve decided to present a different viewpoint here.

Instead of talking about why card counting is great, we’re going to be looking at the reasons why you shouldn’t bother counting cards when you’re next at the blackjack table.

If you’ve been inspired by the MIT blackjack card counting team, who managed to scoop millions at the tables, then prepare to be disappointed.

While it’s true that they managed to win a huge amount of cash, this isn’t the case for most players.

Card counting only gives you a small advantage over the casino, so you’ll find that most players win money very slowly.

You might get lucky and win a couple of thousand one night, but there’s every chance you’ll hit the tables the next evening and walk away with a loss.

That’s the nature of advantage gambling.

For most people, the main
reason to visit a casino is to have some fun.

When it comes to card counting, you’ll find that it’s not particularly exciting.

It requires you to spend hours at a time sitting at the table, trying to subtly work out how advantageous the deck is to you.

You’ll be thinking so much
about counting cards that you won’t be able to chat to others or enjoy the cold
beer sitting next to you.

You can’t just jump in and start card counting as there is quite a bit you need to learn first.

You’ll need to know basic blackjack strategy, which isn’t actually very basic, and then you’ll need to perfect one of the many different card counting systems.

Once you’ve learned how to count cards, the work isn’t over.

You then need to work hard on your demeanour at the table, as you mustn’t give even the slightest hint that you’re counting cards.

Start playing for real money
without preparing yourself properly and you’ll probably find yourself rumbled
in the first few minutes, leading to you being unceremoniously bounced from the
venue.

4. You Need A Lot Of Cash To Start With

Many people think that
counting cards will guarantee profits, however this is only partly true.

You’ll only be tilting the house edge in your favor by a couple of percent when counting cards, so there’s no guarantee you’ll start winning straightaway.

Instead, you might have to wait weeks, months or even years to turn a profit.

It’s vital to know that counting cards is a long-term game and if you don’t plan for this, you could find yourself running out of money before the goal is achieved.

This means you need to start with a hefty bankroll – the MIT team started with $89,000.

The chances are your modest $200 bankroll really won’t be enough to beat the system, even at the lowest stakes tables.

5. You Will Get Caught

Card counting is not illegal.
This means that many nonchalantly try it, thinking the worst that will happen
is a telling off. This is not the case.

If you’re caught card counting at a casino, you’ll be ejected from the premises immediately.

You also won’t be able to redeem your chips with a cashier, meaning that you’ll be embarrassed and broke.

What’s more, you might really
like the casino you’re ejected from. The security staff won’t care though, as
you’ll be banned, never able to return.

You’ll then need to find
another place to play, which could be tough, as you’ll see next…

6. Then You’ll Get Banned All Over Town

When you get caught card
counting – which you will almost certainly be at some point – you won’t just be
banned from one casino.

Instead, you’ll find your
picture circulated throughout the local area, meaning that you won’t be able to
get into any other casinos either.

When this happens, you’ll not be allowed to enter a casino for any reason.

Invited for a work party? You’ll be parting outside, solo. Want to play slot slots? You still won’t be allowed in.

Quite simply, you’ll have to accept that it will probably be many years before you step into a local casino again.

Hopefully you enjoy playing
online games, as they’ll be the only option open to you.

The Lesson?
Leave Card Counting To The Movie Industry

Card counting is a hard skill to master so you’ll need to put in a lot of work before you’re ready to head to a casino.

And when you do, even if you can count cards better than the MIT team, you’re going to get caught out eventually.

It’s unlikely you’ll ever make loads of money through card counting, so is it really worth the risk of getting kicked out and banned from casinos?