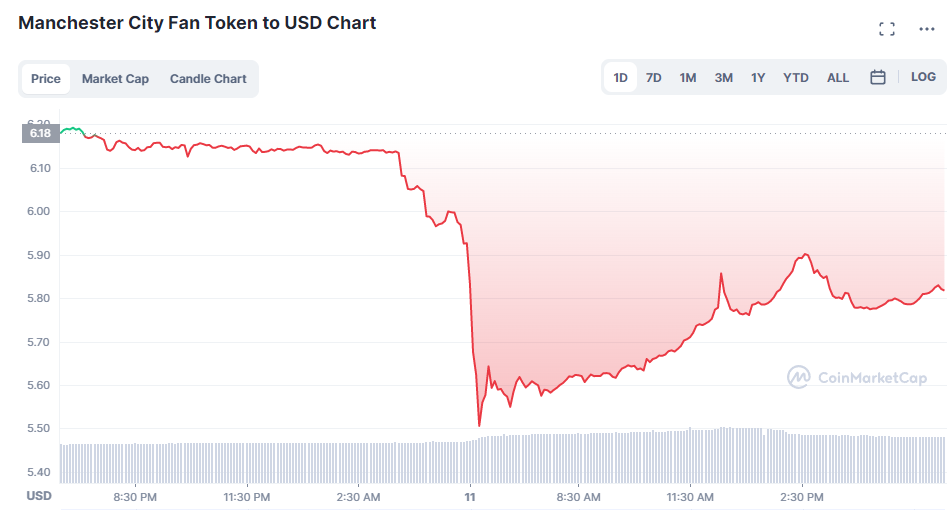 Socios.com, an app built on the Chiliz (CHZ) blockchain, created a fan token called Manchester City Fan Token. Socios has also designed fan tokens for the Ultimate Fighting Championship and auto racing, in addition to various other football teams, the most famous of which is PSG. Holders of fan tokens have a voice in the running of the club and may use it to get admission to special events, games, and promotions as well as to receive VIP treatment and perks.

Manchester City Football Club opted to release CITY in March 2021 after seeing the enormous popularity of PSG’s in January 2020. The success of the team on the field and the growth of blockchain technology will be crucial to the organization’s long-term viability. When rumors circulated that Cristiano Ronaldo would be joining the club, the value of the token increased, but it fell once the move fell through.

Socios.com, an app powered by Chiliz that facilitates interaction between sports fans and their favorite teams and leagues, created the Manchester City Fan Token. Chiliz’s current CEO and company founder, Alexandre Dreyfus, created the company. For nearly two decades, Dreyfus has been at the helm of successful online ventures. Before starting Chiliz in 2017, he worked on other initiatives, including as the online poker rooms Winamax and Chilipoker, and the interactive travel guide Webcity.

With four Premier League championships and ten top-ten finishes in the previous decade, Manchester City has established themselves as one of England’s most popular football teams. Pep Guardiola, widely regarded as the finest manager in the history of the beautiful game, is in charge of the club.

The Manchester City Fan Token not only provides supporters a voice in the club’s decision-making process, but also the chance to unlock exclusive merchandise, events, and experiences. Supporters may do things like choose what the captain’s armband says, have access to the player’s locker room, watch games from the VIP section, and save money on team gear.

As long as CITY is tradable on Socios.com, supporters will be able to buy the token and have a say in how the team is run. And every club fan may get a free Manchester City token, said Stephan Cieplik, senior vice president of worldwide partnerships sales for City Football Group.

The value and growth of CITY are inextricably linked to those of CHZ due to the fact that it may be acquired either through fiat purchases or by swapping CHZ. With CITY, supporters will soon be able to vote in polls, participate in contests and quizzes on Socios.com, and maybe receive cash rewards from the club. CITY may be used in a number of different ways by its users, such as purchasing branded VIP items, staking fan tokens for NFT awards, and utilizing CITY in partner apps.

The Market Value of a Manchester City Supporter Token

When Compared To Other Assets How Does Manchester City Fan Token Fare?

Elrond (EGLD), Monero (XMR), Cosmos (ATOM), Flow (FLOW), and Dash are the cryptocurrencies with which Manchester City Fan Token has the most positive correlation (DASH). If there is a positive correlation between two cryptocurrencies, it indicates that their prices tend to move in the same direction at around the same time. The currencies whose prices tend to move in the opposite way of Manchester City Fan Token include Terra Classic (LUNC), Reserve Rights (RSR), Chain (XCN), Celsius Network (CEL), and Terra Classic USD (USTC).

The 50-day SMA is arrived at by taking the sum of Bitcoin’s closing prices over the past 50 days and dividing by 50.

What Is The 200-Day Simple Moving Average (SMA) For Manchester City Fan Token?

When the current price of Manchester City Fan Token passes a significant moving average, such as the 200-day Simple Moving Average, many cryptocurrency traders pay close attention to the markets.

To get Manchester City Fan Token’s 200-day simple moving average, just add up the token’s closing values over the past 200 days and divide the sum by 200.

What Does A 14-Day RSI For Manchester City Fan Token Mean?

The 14-day relative strength index for Manchester City Fan Token is at 47.44, which is in a neutral zone. The Relative Strength Index (RSI) is a widely-used technical indicator that can be applied to the price of Manchester City Fan Token and other assets. In most applications, a 14-day time frame is employed with the RSI. The RSI is a popular indicator of market momentum. The RSI indicator provides a range of values from 0 to 100, with key levels occurring at 30 and 70. If the RSI value for an asset is less than 30, it is undervalued, and if it is greater than 70, it is overpriced.

When Looking At The Fear and Greed Index, What Might One Expect To See?

The present market emotion was reflected by the Fear & Greed Index as follows: 0–24 extreme fear, 25–49 fear, 50–neutral, 51–75 greed, and 76–100 extreme greed. For some investors, widespread pessimism is a signal to stock up, while widespread optimism may signal a time to cash out. Price volatility, trade volume, social media attitude, and other indicators are just few of the many that go into making up the Fear & Greed index.

What is the Manchester City Fan Token price prediction from 2023 to 2025?

With a range of $ 7.72–$ 13.37, Manchester City Fan Token’s price is predicted to increase by 115.23% in the best case scenario by 2024, based on our analysis of historical data and projections for the growth of the underlying technology industry.

What is the Value of a Manchester City Fan Token in 2022?